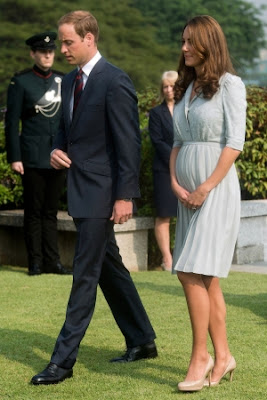 There was a post on Blog Catalogue congratulating William and Kate, the Duke and Duchess of , on the forthcoming birth of their first child, good news for them in particular and for the British monarchy in general, the succession now secured far into the future.  I added my own congratulations but the post also attracted ignorant comment from people who should know better but don’t.

One American described our monarchy as a ‘travesty’ and an Australian pompously went on about what an anachronism it was in the modern world to have an inherited head of state.  This was supported by arrant nonsense about philosophers and political thinkers in the seventeenth century being “more modern and more rational.”  It demanded a response and response I gave, highlighting the importance of monarchy in history.  This is my broadside on ignorance.  It’s been slightly adapted and expanded.

I’m not sure who the ‘more modern and more rational’ seventeenth century political thinkers were alluded to here. It just so happens that the seventeenth century is my speciality, a period of intense political upheaval in the history of . It was the one time that we got rid of our monarchy, albeit for a brief period.

It was a period when the gentle authoritarianism of King Charles I was replaced by the military dictatorship of Oliver Cromwell and the dire Puritanism of the Major Generals. In the end the people had enough of Protectors, Republics and Confusion, calling Charles II home from exile. Since then the institution has gone from strength to strength, gently devolving its former prerogatives and powers to Parliament and People.

There is an acute historical irony here.  The monarchy, it might be said, is an institution in evolution.  It evolves now just as it has in the past.  In the eighteenth century the Americans rebelled against the perceived ‘tyranny’ of George III, eventually creating a monarchical republic.  As George and his descendents continued to devolve power to Parliament, an imperial presidency arose in the States.  Presidents as varied as Andrew Jackson, Abraham Lincoln and Franklin Roosevelt exercised forms of prerogative power that even Charles I would have found shocking.

Looking further afield, consider the history of , where a monarchy was replaced by ‘rational’ forms of terror, mass murder and dictatorship. Look at the history of the last century, conceivably the most terrible in human history, where in place of traditional monarchies in  and  we had murderous tyranny; instead of Nicholas II we had Stalin; instead of Wilhelm II we had Hitler.

Bringing the story up to date, the most politically advanced, stable and culturally tolerant countries in  are all monarchies. Apart from my own country there is the , , , ,  and . It was the monarchy in  that acted as the midwife to a modern democracy after years of dictatorship.

I do wish people would think a little more deeply before they use words like travesty or before they waffle on about anachronism and rationality.

Anyway, well done William and Kate, two more charming people I find difficult to imagine.  They will make splendid parents just as one day they will make a splendid King and Queen.
Posted by Anastasia F-B at 16:55