Raynald of Châtillon -the Scourge of Islam 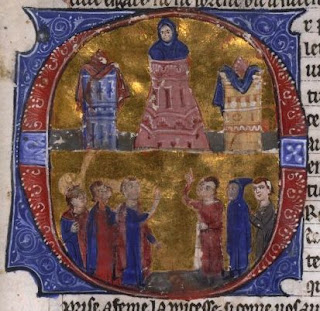 Raynald of Châtillon, a French knight and Crusader, was a figure of fear and and hatred for Muslims, who known him better by the name of Arnat of Kerak. The Muslim historian, Ibn al-Athir, refers to him as "a violent and most dangerous enemy of Islam."

Even today he has some significance, and you will find him in statue form in Damascus, the capital of Syria, together with Saladin, his nemesis. Raynald did much to colour Muslim opinion of the whole Crusading movement. If the fall of the Kingdom of Jerusalem can be attributed to a single man, then Raynald has better right to that claim than any other individual. His ruthlessness, unscrupulousness, opportunism and brutality were to provoke Saladin into a furious offensive against the Crusader kingdom, that led directly to his victory of the Horns of Hattin.

It is important to understand that the enthusiasm for Crusading in the Middle Ages often owes as much, if not more, to greed and opportunism as it did to religious faith. The path to the Holy Land was the path often taken by the 'poor cousins' and the second sons, those who could expect no inheritance at home, and would only be able to make their way in the world by the practice of arms. In essence these men were little more than freebooters, and Raynald was the greatest freebooter of them all.

He served the greater cause only as and when it suited him, and was quite prepared to attack fellow Christians for the sake of personal gain, fully demonstrated by his onslaught on Byzantine Cyprus. To finance the latter expedition he even extorted money from Aimery of Limoges, the elderly Patriarch of Antioch. According to William of Tyre, the chronicler of the Crusades, Aimery, was stripped naked, whipped, his head smeraed with honey to attract insects and then he was left chained in the open under the hot sun. And all this at the hands of a fellow Christian!


In November 1160 Raynald set out to seize the herds of Armenian and Syrian Christians, only to be taken prisoner by the Muslim Governor of Aleppo. He was only ransomed after fifteen years, emerging from his dungeon with a hatred of Islam far in excess of any love he had for Christianity. Indeed, there is very little evidence that Raynald had faith of any kind. Soon after his release married Stephanie of Milly, heiresss of the dukedom of Outrejourdain, the easternmost part of the Kingdom of Jerusalem, which dominated the caravan routs from Egypt to Syria from the castles of Shaubak and Kerak. It was from this point that he became a real nightmare for the Muslims.

By the 1170s there was a mood of relaxed co-existence between the Crusader states and their Muslim neighbours. Many of the Christian lords had adopted an oriental way of life, and were even viewed by the Muslims as possible allies in their own internecine struggles. But Raynald upset this delicate political balance. He was to launch attack after attack, chiefly aiming at plunder and mayhem. It is even suggested by Ibn Jubair that in his pirate raids in the Red Sea, Raynald intended, amongst other things, to make off with the body of the prophet Mohammed and hold it for ransom at Kerak.

Peaceful co-existence was at an end, and Saladin took an oath to kill Raynald, whose offenses were made even worse when he tried to capture the Sultan's sister in 1187, breaking a truce to attack a cravan. Saladin was left with no option but to preach Jihad against the whole Crusader Kingdom. In this Raynald had encompased his own death and the fall of Jerusalem.
Posted by Anastasia F-B at 09:18