In Blood Stepped in so Far 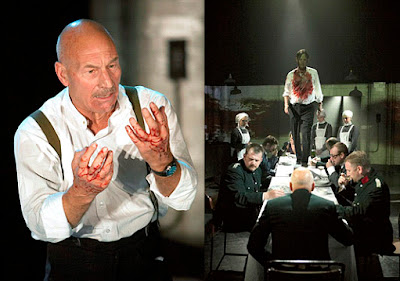 I love Shakespeare for his words, his poetry and his great theatrical dramas, high and low, tragic and comic.  He may have been a poor player but he did not strut and fret his hour upon the stage and then was heard no more.  He has been heard down the ages; he will be heard through time, for as long as English is spoken and the theatre exists.  That’s the other reason why I love Shakespeare – his abiding relevance.
His plays can be read on so many levels, read in such a way that they bring out novel and dynamic interpretations.  Last year, in his directorial debut, Ralph Fiennes created a striking Coriolanus.  The setting is and not ; the setting is a war-torn world which could easily be , , , or even , where it was shot on location.
Incidentally, to go off at a slight tangent, that same play once caused a riot in !  It was even banned for a time.  Yes, that’s right.  In February 1934 the government of Eduard Daladier, reacting to an anti-parliamentary interpretation that had been placed on a new production of the play by the right-wing pressure group, Action Française, banned further performances. In the growing heat engendered by the Stavisky Affair, a scandal that exposed extensive political and financial corruption, members of the group had appeared in the theatre in force, cheering on the play's denunciations of political leaders.

In Action Française, the movement's newspaper, praise of Coriolanus was used as an excuse to attack French democracy; to hurl accusations of corruption and villainy against the republic and its institutions in the light of every fresh revelation about Alexandre Stavisky, a Jewish financier and embezzler. Circulation shot up as Action Française urged people to come and protest in large numbers at the Chamber of Deputies, the first time in history, so far as I am aware, that Shakespeare contributed towards a major political riot - and a French one at that!
Anyway, let me get back to my theme, which is the abiding topicality of Shakespeare’s work.  I watched a performance of Macbeth last week on BBC iPlayer, and what a performance it was, the Scottish Play as I’ve never seen it before.  Directed by Rupert Goold and starring Patrick Stewart (think Star Trek!) in the title role, it brought out so many nuances.  The play’s central themes of ambition, treachery and guilt are all there, but there was something more – a brilliant dissertation on the nature of tyranny and the moral corruption it engenders.
The setting, and the costumes, as well as some old news footage of goose-stepping soldiers, make it clear that Stalinist Russia has become Stalinist Scotland!  Macbeth has been transformed from the courageous soldier, whose reputation travels ahead of him, to a bloody dictator.  The growing body count seems to merge into one great purge.  People live in fear and fear engenders suspicion.
The whole atmosphere is suffused with menace, as the terror takes deeper hold.  Even Shakespeare’s own words take on added meaning.  I’m thinking here of the lines in Act Four, Scene Two, where the earl of Ross speaks to Lady Macduff, whose husband has not long fled the country;
I dare not speak much further;
But cruel are the times when we are traitors
And do not know ourselves; when we hold rumour
From what we fear, yet know not what we fear,
But float upon a wild and violent sea
Each way and none.
Cruel indeed are the times when we are traitors and do not know ourselves.  Macbeth’s hired assassins come like an NKVD death squad.  Lady Macduff and all her children are butchered.  Earlier we see Banquo being murdered by means of a lethal injection and Ross being interrogated in what could easily be a cell in the Lubyanka.
The lead performances were excellent, Kate Fleetwood’s depiction of Lady Macbeth as good as that of Patrick Stewart as the king, dammed by delusion and equivocation.  Even the lesser roles I’ve never seen performed more brilliantly.  How wonderfully sinister the three witches were, the three weird sisters who appeared as just that – sisters, hospital sisters to be exact.  My goodness, these are no angels of mercy!
The setting itself is kind of hospital come hell’s kitchen come hotel come lunatic asylum which serves as Macbeth’s castle.  The atmosphere is intensely claustrophobic.  As the play enters into the dénouement we are no longer in Stalin’s but in Hitler’s bunker.  Yes, the references to Downfall are obvious!  There were other movie references I recognised.  At the very end, an end after the end, in a nice little touch by Goold that I feel sure Shakespeare himself would have admired, we see the Macbeths, holding up their bloody hands in an old-fashioned caged elevator.  It's on its way down.  This is Angel Heart; this is the descent into hell.
It will be on iPlayer until 4 July if you are able to get it.  Incidentally, in the programme notes it says that the play is set in an “undefined and threatening central European world.”  I assumed this meant that all of Shakespeare’s geographical references had been removed, but no, still stands where it did…even if it is part of an undefined and threatening central European world!
Posted by Anastasia F-B at 16:15