In with a bang; out with a whimper 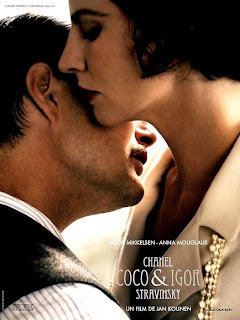 What is it about Parisians and premières? Here we are in the most sophisticated city in the world with some of the most sophisticated people in the world. But judging by some famous past examples, judging by their reaction to innovation, they like their art to be ‘just so’ – a literary reference which Kipling enthusiasts will understand –rather than radically different. In 1861 they gave Wagner’s Tannhäuser a hostile reception because of some innovations in structure and presentation, nothing, really, compared with the way in which they greeted Stravinsky’s incomparable Le sacre du printemps (The Rite of Spring) when it opened in the city in May, 1913.

It is this, one of the most famous riots in musical history, that acts as an overture, and what an overture, to Coco Chanel and Igor Stravinsky, a biopic, of sorts, directed by Jan Kounen, telling of the alleged love affair between two of the great icons of twentieth century culture, one of smells, the other of sounds! It stars Anna Mouglalis as a coolly impressive Coco Chanel and Mads Mikkelsen as a coldly unimpressive Stravinsky. And then there is Elena Morozova as Stravinsky’s wife Catherine, not a bad performance of a doe-like traditionalist crushed between two egos.

To begin with I must say I absolutely adored Mouglalis in the role of Chanel, the great couturier. She was chic, full of poise and elegance, as calmly stylish as her sumptuous art deco mansion, dominated by a design scheme in black and white. The movie itself is an art deco dream, in visual terms as sexy as it is possible to get. It’s a work of pictorial art framing a rather lifeless story, one lacking in true human warmth. It’s a tale, if you like, of two icebergs passing in the night.

I’m getting ahead of things here. As I say, the movie overtures with the 1913 riot in the Théâtre des Champs-Élysées, where the audience is confronted by pagan, pulsating music accompanying pagan, pulsating dance. It’s beyond the comprehension of most; it’s seemingly not beyond the comprehension of Coco, who sits detached and impressed among the outraged bourgeoisie. Her subsequent attempt to meet the artist is spurned, isolated, as he is, in a fury of anger and dejection.

Now we fast forward to 1920, the intervening war and upheaval conveyed, I have to say, by a not very satisfactory montage. Coco, recovering from the death of her English lover, Arthur ‘Boy’ Capel, at last secures an introduction to Stravinsky. Having left Russia following the Revolution, he is living in impoverished French exile with his wife and children. Coco offers them the hospitality of her villa outside Paris.

Now begins the main movement of the piece, but what a disappointment it is after the thrilling, orgasmic overture. Well, yes, it’s a love affair, one with orgasmic moments, but oddly enough there is hardly a trace of real passion. I can’t be sure if this was Kounen’s intention, but Coco and Stravinsky seem as emotionally uninvolved as they are physically involved; as creative in their individual enterprises as they are uncreative in love. As I say, they came across to me like two great icebergs, an odd counter-point to the passionate score, with continual references to The Rite of Spring, pagan, visceral and doom-laden. He composes; she presides over the distillation of Chanel No. 5; they have sex in between, the composer’s tubercular wife increasingly irrelevant in the background, a reminder of more traditional, less revolutionary values of faith in religion and fidelity in marriage.

That’s about it, really: the music is lavish, the cinematography is seductive, the fashions gorgeous, the settings impressive, the attitudes perfect…but there is no magic, there is no chemistry, as is said, between the two artists.

Impressive as it is Coco Chanel and Igor Stravinsky never really pushes below the surface. The elements are there, the elements of a sublime story, of a sublime composition, but Kounen, in the role of a conductor, simply fails to pull them together. In the end his direction is as starchy as the movie’s overly formal title (why not simply Coco and Igor?) As a result the movie is both beautiful…and boring. It’s as stylish as an advert for Chanel No. 5, wonderfully elegant and tiresomely superficial. I wanted so much more; I wanted to see the overture continue, the excitement continue. Instead the whole thing was just…well, let me just say that it was climaxes in the midst of an anti-climax!