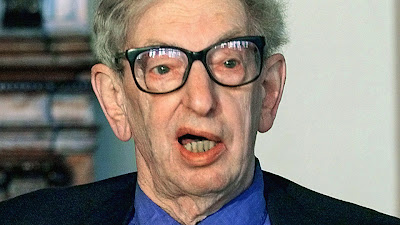 The day after I left for Tunisia Eric Hobsbawm died.  A former professor at , he was ‘’s best known Marxist historian’.  I suppose he must have been; it said so in the Guardian, though just how many outside the common rooms and beyond the chattering classes knew of this ghastly old fraud is open to question.  Now you have a flavour of what is to follow.  Read no further if you think it a sin to speak ill of the dead, for I am about to speak ill; Ana’s silver hammer is about to fall upon Hobsbawm’s head!

For me his passing really does mark the end of a political Cretaceous period.  He was the last Stalinist, the last of the ideological dinosaurs who corrupted intellectual life in this country for so many decades.  I’m rather glad I was away, missing some of the more nauseating tributes, including one from Ed Miliband at the Labour Party conference, where he was described as “an extraordinary historian, a man passionate about his politics and a great friend of my family.”  Hmm, yes, I take this as a measure of the Milibands.  If you do not already know that measure you will before I have finished.

He was also lauded by the BBC, no surprise there, in that Hobsbawm might be said to have defined a large part of the Corporation’s political and intellectual outlook in much the same way that the creepy Jimmy Savile defined its subterranean sexual morals.

I was disappointed, though, to note that praise also came from Niall Ferguson, a right-wing historian for whom I hitherto had considerable respect.  He was rash enough to describe Hobsbawm’s cycle of books beginning with The Age of Revolution, 1789-1848 as “the best introduction to modern world history in the English language.”  What utter rot!  Has he actually read these awful, badly written ideological apologetics, I have to ask?  Either he has completely failed to understand the falsity here or, like so many others, has descended into abject hypocrisy.

Let me give you this scenario.  Nick Griffin, leader of the British National Party - no friend of the Milibands - has taken part in an in-depth television interview.  In the course of this he was asked one key question – if Hitler had achieved the radiant future he promised would this have justified the murder of six million Jews?  He answers in one word: yes.

Now just imagine the perfect storm that would follow, just imagine the ostracism and the denunciations.  Of course it never happened; it’s a fiction.  It is no fiction that Hobsbawm was asked a similar question by Michael Ignatieff in an 1994 interview, namely, if the “radiant tomorrow” had actually been created in the Soviet Union would the death of 15 or 20 million people have been justified?  Yes, came the reply.  Was there a storm, was he ostracised and denounced?  No; instead Tony Blair made him a Companion of Honour in 1998.

Hobsbawm remained loyal to his murderous political passions all of his life.  He became a Communist at an early age while living in at the beginning of the 1930s.  In another interview, perhaps more revealing than he ever intended, he said he joined the Communist Party partly because he was Jewish - “if I hadn’t been, I might well have become a Nazi in those circumstances.”  In a deeper sense he did: that sense in which both Nazism and Communism have a similar view of the value of human life.

Unfortunately for us he came to before Hitler took power, though he always held this country, its people, its politics and its institutions in contempt.  Fortunately for him he did not go to the , his ideological motherland.  If he had, as a foreigner, an intellectual and a Jew he is unlikely to have survived Stalin’s purges.

Hobsbawm was a traitor in spirit.  A member of the Cambridge Apostles in the 1930s, it may very well be proved at some future point that he was also a traitor in deed.  His treason in word began early.  A supporter of the 1939 Nazi-Soviet Pact, he co-authored a pamphlet defending the Soviet attack on , saying that Stalin was merely trying to protect “from an invasion by British imperialists.”

There is another irony here.  Let’s assume that this defender of the Nazi-Soviet pact had gone to the instead of taking advantage of British liberty, including the liberty to write laughable twaddle.  Let’s say that, by some miracle, he had survived the Great Purge, no doubt by lauding Stalin and denouncing others.  Well, then, that same Pact would almost certainly have finished him.  For Stalin, as a gesture of friendship and goodwill, was delighted to hand German Communist exiles over to the Nazis.

Hobsbawm, incidentally, was in the habit of referring to Orwell as the “upper-class Englishman Eric Blair.”  Englishman he certainly was; upper-class he certainly was not.  What marks Orwell out was his decency and his honesty, his contempt for the forms of abject power worship embraced by the likes of Hobsbawm, full of contempt for people while full of love for the Masses.

In the end the Hobsbawm disease is reducible to one thing: the cancer of abstraction.  He remained loyal to the ‘ideals’ of the Russian Revolution, even after those same ‘ideals’ descended to a murderous practice time and time and time again.  But the grand illusion actually goes deeper; it goes as deep as Rousseau and the French Revolution.

The Soviet Experiment, you see, was for Hobsbawm just the latest expression of 'Enlightenment Values', a belief that it was possible to create the world anew following an abstract blueprint.  Those who are not deluded understand the implications of this – the death of millions.  More human beings have been destroyed by Communism and ‘Enlightenment Values’ than by any other force in history.  And there never was, never could be, a happy outcome, only a mountain of skulls that would have made even Tamerlane blanch.  Not Hobsbawm.

I have the deepest contempt for this man’s legacy, for the malign impact he has had on the intellectual life of this country, for the way in which his minions and fellow travellers have been allowed to corrupt so much of the media establishment, particularly the BBC, an organisation that has become a national disgrace.  It is indeed a matter of concern, as Michael Burleigh noted in the Telegraph, that such dubious figures have been given licence to dominate the soft culture of the BBC and so many universities.

I return to George Orwell, specifically to his essay on Charles Dickens, which concludes with the following observation;

Smelly little orthodoxy never let go of Hobsbawm’s soul.  I, too, see his face in his writing.  There he is, smirking. His eyes show it all.  They show him to be mean-spirited, unimaginative and small-minded. His is the face of a hypocrite and a liar. His is the face of a twentieth century Communist, smelly and orthodox to the end.  He will be forgotten, his dishonest and derivative books unread.  He was bad rubbish.  Good riddance. 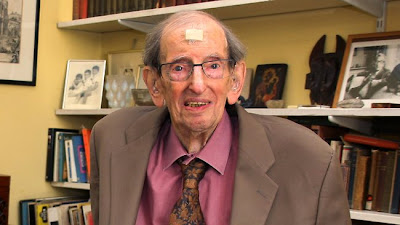