Hungary’s Future is all in the Past

Auntie Angela Merkel, in the fashion of an earnest and humourless German Leherin, is in habit of lecturing us all on the dire consequences of the collapse of the European Union.  The alternative is the past, the alternative is German history, and we all want to avoid that!
The thing is, you see, Auntie and the others who believe in the benighted European ideal have a kind of Marxist view that history has been surpassed and superseded; that the past, so to speak, is all in the past.  I can assure you that it’s not; modern , the of the European Union, is example enough to dispel that comforting illusion.
Just imagine how Europe and the world would react if Germany repudiated the Treaty of Versailles which followed the First World War, the Versailles ‘Diktat’ which so enraged Hitler and the other German nationalists.  Ah, but that is a history too deeply buried.  Who now cares about that distant past?
does, oh, not about but about the Treaty of Trianon, its own post-war settlement, concluded with the Allies in 1920.  By this the old Greater Hungry was reduced to a rump, a land-locked central European state, a kingdom without a king ruled by one Miklos Horthy, an admiral without a navy in a country without a coast. Horthy later went on to form an alliance with Hitler, repudiating Trianon and recovering some of the lost territory before the whole dream went belly up. 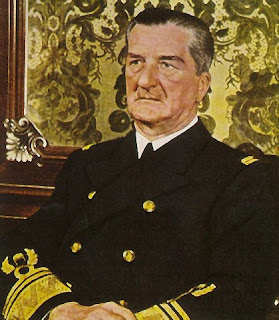 Ah, but is such stuff as dreams are made on and its little land is rounded by…places it wants back!  Now I feel sure that Prime Minister Viktor Orban, whose conservative Fidesz party came to power in the election of 2010, would not dream of going to war with Austria, Slovakia, Romania, the Ukraine, Serbia and Croatia to regain in whole or in part what was lost, at least not all at once.  But that has not stopped him repudiating the treaty and inaugurating a ‘national day of mourning’ on the anniversary of its signing.
Viktor is a decent man.  He has declared himself firmly opposed to monuments for such dictators as Lenin, Stalin and Hitler.  Well, they are all foreigners, are they not?  He’s a bit more ambivalent when it comes to ’s Horthy.
The Admiral is making something of a comeback in a country still traumatised by a ninety-three year old treaty.  Last month a bust of the old boy was unveiled in Csokako in the north of the country by the paramilitary Hungarian Guard, a movement closely allied to the right-wing Jobbik Party.  It’s nothing to do with me, says the prime minister; it’s a matter for local government which monuments are erected or not.  Just as well, I suppose, that it was not Lenin, Stalin or Hitler. 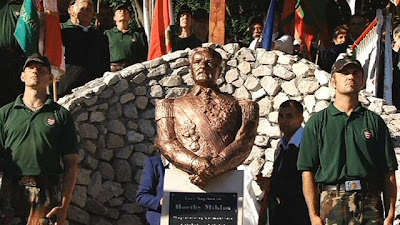 “Viktor Orban is a man of the past,” Socialist party president, Attila Mesterhazy, said in his annual address in parliament in March. “He wants to bring back a that’s long gone. That’s why they’re always citing politicians from the beginning of the 1900s. That’s why they’re trying to fashion the state after the Horthy regime, the public law configuration, even parliament.”
The thing is, though, in the past is very much the present, with Orban moving the country back into an uncertain future. How I love history; how I love her sense of irony.
Posted by Anastasia F-B at 16:02