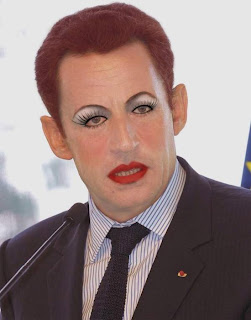 Speaking in the House of Commons in 1845, Benjamin Disraeli, in a mood of anger against Sir Robert Peel, then Conservative Prime Minister, said that the right honourable gentleman had caught the Whigs bathing and walked away with their clothes.  What he meant was that, in repealing the Corns Laws, Peel had stolen the ideas of the main opposition party.

This reference came to mind in reading an account of Nicholas Sarkozy’s speech at Le Raincy on the suburbs of last week.  He’s in a fairly desperate mood, poor man, fighting for his political existence after falling behind François Hollande, the Socialist Party candidate, in the first round of the French presidential election.  With the two men going forward to a second and deciding contest on May 6 things are not looking good for Sarko, running up to ten points behind his colourless rival in the opinion polls.

All is fair in love, war and French politics.  Looking for a way of saving his hide Monsieur le Président is alert to any opportunity offered.  There she was; how could he possibly resist?  He caught Marine le Pen bathing and walked away with her clothes.  I can just picture him in drag, an ensemble topped with a blonde wig.  Talk about prêt-à-porter!

Marine Le Pen, leader of the right-wing National Front, won’t be standing in the final round, having come third in the first.  I say she won’t be standing but in a sense she will, in that she has become something of a king…sorry, make that queen maker.  She secured almost six and a half million votes in last Sunday’s first round, a record eighteen per cent of the poll.  With less than a million votes separating Sarkozy from Hollande on that occasion it’s a reservoir that he simply can’t ignore.

So, there he was, talking in a mainly white neighbourhood, the quintessential Parisian denouncing the Parisian elite.  It wasn’t just Parisian urbanites he denounced, no; into the mix came drug dealers, Muslim preachers, Muslims who lock up their wives, police killers and foreigners, foreigners and more foreigners.  “I speak for the people who have had enough of lessons from those who live in the posh districts of ”, he shrilled, seemingly unaware that he would have to include himself here.

The address was to the people of La Raincy, who live not too far from the grim estate of Clichy-sous-Bois, the immigrant and Muslim dominated area where the 2005 riots began, but he really had his eye on a much bigger audience.  Speaking directly to Le Pen’s masses he said “I respect you, hear you, in a certain way understand you.  Because I speak to six and a half million French people, I am supposed to be a fascist?”  His critics, he shouted, were hypocrites who understand nothing of the justified fear that foreigners were trying to rob of its identity.

I would say that what’s robbing France of its identity, what’s robbing every European nation of their separate identities, is the cosmopolitan ‘ideal’ of Europe, an ‘ideal’ that Sarkozy promoted in defiance of his own people, who voted against the Lisbon constitution.  However, here I’m simply going to put that fundamental truth to one side and concentrate on the main issue, which is Sarakozy’s opportunism and his hypocrisy.

I wonder about the ‘certain way’ in which Sarko understands the National Front voters. Do they understand him; do they see through this naked demagoguery, do they see that he is hoping that they will enable him to extend his tenancy of the  for another five years?  Once safely behind those doors one thing can be guaranteed: that ‘certain understanding’ will evaporate as fast as rain on a Parisian summer’s day.

Meanwhile poor naked Marine is playing her own game.  She is campaigning against that ‘certain understanding’, hoping that Sarkozy’s defeat will destroy his UMP party, allowing the National Front to make gains in the parliamentary elections scheduled for June.  She might reconsider her opposition, she says, she might call on her millions to vote for the President, but only if he agrees to support her parliamentary candidates against the Socialists.  It remains to be seen just how elastic that ‘certain understanding’ is.
Posted by Anastasia F-B at 15:42