The Mirror of Virtue 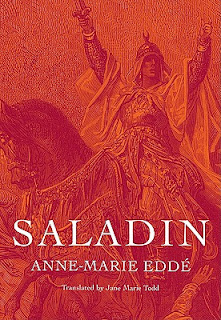 On the first morning of my first full day in Egypt the first place I visited was the old Citadel of Cairo, with fortifications built by Saladin in the late twelfth century to protect it from the Crusaders.

I first came across this remarkable figure, an historical giant who stands across both the Muslim and Christian world, in the pages of The Talisman, Sir Walter Scott’s nineteenth century historical romance of the crusades, which I read in my early teens. In so many ways Saladin was the real hero of this book, a verray, parfit, gentil knyght, a Victorian recreation of a chivalric ideal.

Saladin has long been celebrated by his enemies, much more than his friends, even as far back as the Middle Ages. He seemed to be the very personification of a code of conduct that was more mythic than real, a reproach to his Christian opponents, who professed an ideal which they ignored in practice. Saladin here was the mirror of virtue. In Dante’s Inferno he is to be found in the mild first circle of hell, along with Homer, Euclid, Socrates and other virtuous pagans.

In contrast, he was a largely forgotten figure in the Muslim world, his reputation surpassed by Baibars, the Mamluk sultan of Egypt who was instrumental in bringing the Crusader presence in the Middle East to an end. He was only rediscovered in the late nineteenth century as an avatar of Arab nationalism, rather ironic considering that he was Kurdish.

Given that Saladin is a man possibly more wrapped in myth than any other it would take a bold person to attempt to disentangle the Gordian knot; to separate out fact, fiction and dewy-eyed romance. So, it was with keen interest that I opened the pages of Saladin, a biography by Anne-Marie Eddé, originally published in France in 2008. The new translation by Jane Marie Todd, published last month by Harvard University Press, was the first book I bought on my return from Egypt.

It’s a remarkable piece of work by a woman I can only describe as a historian’s historian. It’s well-argued, scholarly, and thoroughly researched book, rich in all sorts of detail. It’s also an excellent exercise in deconstruction or exploration. It does not demolish the myth of Saladin; it simply makes him, and it, more understandable.

Eddé, a specialist in Medieval history, begins with one basic question: how did this relentless jihad fighter come to be identified as valiant, generous and magnanimous figure among his former foes? Some truths are simply stated: Saladin was everything he was cracked up to be: he was pious and he was tolerant; he was a man of his word; he was a skilful soldier and an even more skilful politician; he was a patron of the arts and the sciences…and he was the world’s first spin doctor.

The Saladin myth, in other words, really begins with Saladin himself. In the complex religious and political world of twelfth century Islam he made his way to the top by selling himself, by advancing his own platform, by convincing others he was the man and this was his moment.

He was a deal-maker without parallel, moving by soft degrees to the point where he replaced the Fatimids with his own Ayyubid dynasty, uniting Egypt and Syria. He was a self-promoter, convincing much of the Muslim world that only he was capable of leading it against the threat posed by the Crusaders. He was pious, certainly, but he was no Osama bin Laden, no stupid fanatic. He could be pragmatic as occasion demanded, making bargains even with the enemy, all part of a bigger political game. Such was his success that he laid the basis for multiple interpretations of his life and actions, something the author explores with admirable skill.

Some of the details are fascinating, things I was not previously aware of. For instance, even in the midst of conflict, Saladin negotiated trade deals with Italian merchants, obtaining the wood, pitch and iron that enabled him to build the Egyptian fleet, no matter how hard the Papacy raged.

There is another truth here worth emphasising, that the Crusades themselves, from beginning to end, were a political disaster, which in the long run weakened and destroyed Christian power in the east, the power and integrity of the Byzantine Empire. Compared with such cynical ‘crusaders’ as Venice’s Enrico Dandelo it’s little wonder that Saladin is such a paragon, a true Christian gentleman!

Another virtue of Saladin is that it helps to give some understanding of what the Crusades looked like from a Muslim perspective, this movement of outlandish outsiders they generally referred to as the Franks. It was their beliefs that the Muslims found most perplexing, as one twelfth century Syrian document makes clear;

The most amazing thing in the world is that the Christians say that Jesus is divine, that he is God, and then they say that the Jews seized him and crucified him. How can a God who cannot protect himself protect others? Anyone who believes his God came out of a woman’s privates is quite mad; he should not be spoken to, for he has neither intelligence nor faith.

Saladin was of and beyond his times, a figure I personally would parallel with the Hohenstaufen emperor Frederick II, another wonder of the world. Eddé certainly gives us a better sense of the man, as a politician as well as a soldier, an individual who was inevitably going to appear like Ozymandias to subsequent generations. She disposes of the exaggerations while still leaving us with a figure whose myth was in a traditional form, a simple narrative explaining a complex truth. Saladin was no icon; he was a man, but what a man.

I thoroughly recommend this book and I’m going to give it five stars. I should say, though, that its strength is in academic detail rather than narrative line; some people may be discouraged by her thematic arrangement. Notwithstanding this, Eddé’s approach is forensic and exhaustive, and on that level I really don’t think this book will ever be surpassed, either as a work of history or of biography.
Posted by Anastasia F-B at 16:09