Brothers in the Wing 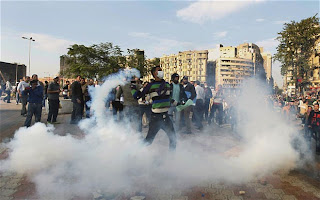 “There are two groups trying to undermine the transition to democracy in Egypt – the Israelis and the Saudis”, so I was told by one of the most educated and informed people I met in the country, a Muslim of impeccable liberal outlook, a man who played an active part in the events that saw the departure of Hosni Mubarak in February. Both countries, apparently, are financing Islamist extremists.

“OK”, I said, “I can understand that an Egypt committed to a new path, an Egypt committed to free elections, representative government and human rights would seriously unsettle the antediluvian gerontocracy in Saudi Arabia, but Israel, why on earth would Israel want to see the advance of forces that most threaten its security, forces that are at best lukewarm to the 1979 peace treaty and at worst actively hostile?” “Because the victory of Islamic extremists would end all support for Egypt in America and the West.”

I did not push the point because I felt that we were moving on to the quicksand of conspiracy theory, ground in which even the strongest counter-arguments are certain to sink beyond recovery. But it was perfectly obvious to me that Egypt, taking this man as an avatar, the best of the best, is facing a deeply uncertain future; that liberal opinion, such as it is, is weak and confused, uncertain of the direction to follow, apprehensive about the outcome, looking to blame forces beyond its control.

Prior to the election the demonstrators in Tahrir Square were calling for the army to step down from the commanding position it has held ever since the fall of Mubarak, but there seemed to be no real idea of what was to come in its place, no idea how order would be maintained. It’s all very well to call for civilian rule. The real question is which particular group of civilians will rule?

I left the country on the first day of the first free parliamentary election that Egypt has seen in decades. On the plane home I read that day’s edition of the Egyptian Gazette, the country’s oldest English language newspaper. “Monday November 28 2011”, the leader declared, “will indeed emerge as a watershed…”

And so it is proving. An election that was generally fair, an election with a high turnout, an election where the result was not known in advance…and an election that has seen the advance that my Egyptian friend most feared, a victory for the Islamists, a double victory, by his lights, for Israel and Saudi Arabia.

The simple truth is that the protesters of Tahrir are representative of not very much beyond themselves. There is a bigger constituency that sees things in far simpler terms. If you like they see things in black and white. Our benighted leaders, from Barack Obama to David Cameron, also saw things in black and white; that the fall of the old regimes was a preamble to democracy. But democracy is not a panacea and elections do not guarantee freedom. In Egypt one tyranny looks set to replace another, more frightful in every way – the tyranny of a majority.

Last Saturday the online version of the Egyptian Gazette reported on the early results of the ballot, showing that the Islamist parties are “sweeping to victory”, not just the ‘moderate’ Freedom and Justice Party, the political face of the Muslim Brotherhood, but the more hard-line Salafists, represented by the Al-Nur party and Al-Wassat, which calls for a strict interpretation of Islamic law. Liberal movements like the Wafd made a disappointing showing. In all Islamists won two-thirds of the votes cast and look set to dominate parliament when the whole process is finally complete. Their message was simple enough: non-Islamist candidates were ‘infidels.’ This is a black and white that a great many of the poorer Egyptians understand, those not of the educated middle-classes.

In February, right at the beginning of the Arab Spring, I wrote a piece called Reflections of the Revolution in Egypt, making the following observations;

I cannot myself say what the outcome will be, though not a stable western-style democracy, that much I will hazard. The Islamists in the Brotherhood may not be as strong as they were in Iran, but they are still a potent and organised force, in much the same manner that the Bolsheviks were a potent and organised force in Russia before their putsch in November, 1917… What do the Egyptians want themselves? For some time now polls have shown that they want democracy…but they also want sharia law, a glaring contradiction. The source of law can be God or it can be the people; it can’t be both. Will another Nasser emerge – could the country take more of the absolute misery that he inflicted on it? – or someone altogether more sinister, more brotherly?

February and November, there seems to be an unsettling historical symmetry here, Bolsheviks and Brothers. In the same article I also quoted from Burke’s Reflections on the Revolution in France, my favourite political testament by far. “The effect of liberty to individuals”, he wrote, “is, that they may do what they please: we ought to see what it will please them to do, before we risk congratulations.”

Are we now seeing what pleases Egypt, what pleases the ‘Arab street’? If so, I can only feel sympathy for the many tolerant people I met, Christian and Muslim, people like the friend I mentioned above. If he reads this I would only ask that he look more deeply at the issue, to reflect that if democracy in the sense that we understand it in the West is frustrated in Egypt it will not be the fault of the Saudis or the Israelis.
Posted by Anastasia F-B at 16:15