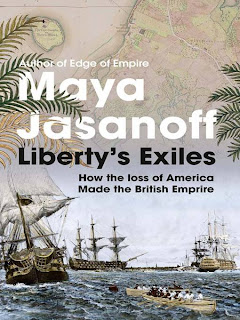 The American War of Independence conjures up so many heroic images and so many myths, anything from Paul Revere’s Ride to the winter at Valley Forge; from the gallant Minute Men to the ferocious ‘Hessians’, the mercenary army of a ‘tyrant’ king.

Have you ever considered what happened to the losers, those who fought on the ‘wrong side’? I’m not thinking here of those dreaded Hessians! No, the people I have in mind were the colonists who remained loyal to the crown, loosely grouped by the Patriots as ‘Tories’.

Their story is told in Liberty’s Exiles: the Loss of America and the Remaking of the British Empire by Maja Jasanoff. The book contains some intriguing snippets of information on the social and demographic composition of those who supported the crown in the struggle. They were not all conservative by any means, not all the upper echelons of colonial society.

There were the slaves, some 20,000 of them, who agreed to fight for the British in return for freedom. These included some two dozen men who had belonged to Thomas Jefferson, the leading author of the Declaration of Independence, and one Henry Washington, once the property of…well; I don’t think I really need to tell you, do I?

Imagine the scramble at the end of the war in Indochina in the 1970s, as those who had sided with the Americans in Vietnam and Cambodia tried to get out by whatever means possible. Imagine a similar scramble in 1783 with the loyalist cause lost. Uncertain of their future in the new United States, some 60,000 people made for the borders, some to Canada, some to the Bahamas, some to Britain, some to the West Indies, some even going as far as India and Australia. The oddest of all is those who sought refuge in Sierra Leone in Africa, there setting up a Utopian community in one of the most unpromising environments on earth.

There were also the Indians, the native allies of the British. Here special mention should be made of Thayendanegea, also known as Colonel Joseph Brant, chief of the Mohawks, who had fought for the crown both in the Seven Years War (the French and Indian War) and the War of Independence. He came to London, creating a sensation at a costume ball by appearing in full Mohawk dress, his face covered in scarlet war paint. Doubtless seeing an Indian for the first time in his life, an Ottoman diplomat, probably oiled with drink, got it into his head that Brant’s painted face was really a mask. He took him by the nose and made efforts to pull it off, whereupon the mortified Mohawk took out his tomahawk and swung at the head of the offender. Exit Turk pursued by an Indian!

Although some black Loyalists also ended up in London, where they were reduced to beggary, far more took refuge in Jamaica, not at all welcome by a slave-owning society. The presence of these men, the yeast of liberty, paradoxically made the condition of the island’s large slave population even worse than it was before, just to ensure that the idea of freedom was contained.

Jasanoff gives some idea of what conditions were like by drawing on the diary of one Thomas Thistlewood, a plantation overseer. Runaways had their heads cut off and stuck on poles as a warning to the others. Those guilty of minor offences had their cheeks sliced and their ears cut off. Of one slave caught eating sugar cane Thistlewood notes “I had him flogged and pickled, and then made Hector shit in his mouth.”

Some of the impoverished blacks who ended up in London were aided by an organisation called the Committee for the Black Poor, who mounted what must count as the first ‘back to Africa’ movement in history. Ships were chartered to carry some two hundred people to Sierra Leone, where they landed and set up home in 1787 on land bought from the local Temme tribe, anticipating later developments in Liberia by some decades.

The whole thing, the story of the white and black diaspora from the United States across the globe, to every corner of what was soon to emerge as the second British Empire, is quite fascinating. It was the first great refugee crisis in British history, the story of whole groups of people as well as unique individuals. It’s the story of Elizabeth Johnston, a young mother from Georgia who spent thirty years looking for a new home, a pilgrimage that took her from Britain, to Jamaica and to Canada. It’s the story of any number of others like her, white, black or red.

There is another important aspect to this story. The émigrés played an important part in the building of the second British Empire, that’s certainly true; but they did something even more important – they helped determine its evolution and its character, at least in the Anglo-Saxon parts. Though they had remained loyal during the American Revolution, they carried into exile many of the democratic ideals of the Thirteen Colonies. Having enjoyed a high degree of liberty in their old homes they did not readily adapt to distant and paternalist rule. The British authorities themselves, learning from the American experience, and anxious to avoid further uprisings, were later to hand out responsible government to Canada, Australia and New Zealand.

What happened to Joseph Brant, you may wonder? Well, after failing to catch and scalp his Turk he managed to set up home with his people under British protection in Ontario, a particular group of ‘Tories’ who were to enjoy life, liberty and the pursuit of happiness that would almost certainly have been denied them in the land of the free.

This is an important book on a neglected subject. Exhaustively researched, it is virtually guaranteed to be the standard text in this area for some time to come. I only have one minor quibble over the author’s unfortunate tendency to slip at points into a slightly infelicitous use of jargon, which is why I am giving it four stars rather than five.
Posted by Anastasia F-B at 15:59