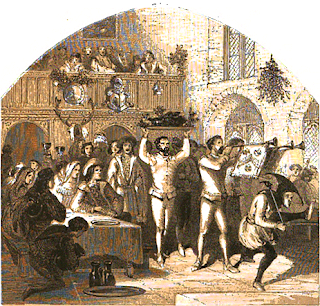 Has a year really gone past? It seems no time at all since last Christmas. Time is relative, of course. I can still remember when the intervals between one festive season and another seemed like an eternity. Now the chariot of Chronos is speeding up, a sign, I take it, that I am getting older, now close to a quarter century!

Christmas, Yule Tide, the Winter Solstice, call it what you will, I love the whole season. It’s the time when I am at my most reactionary, when my love for continuity, tradition and the past becomes strongest. It’s a time when Christian and Pagan unite in greenery, mistletoe, holly, burning logs and ancient ritual; a time the dark closes around the celebration of light.

It’s a time for re-reading Hilaire Belloc’s wonderful essay A Remaining Christmas, given to me when I was a child by my much beloved grandfather, a treasured memory both of him and of times past. Belloc writes with such conviction, with such moving reverence of the setting of his own celebrations, now long gone;

This house where such good things are done year by year has suffered all the things that every age has suffered. It has known the sudden separation of wife and husband, the sudden fall of young men under arms who will never more come home, the scattering of the living, and their precarious return, the increase and the loss of fortune, all those terrors and all those lessenings and haltings and failures of hope which make up the life of man. But its Christmas binds it to its own past and promises its future; making the house an undying thing of which those subject to mortality within it are members, sharing in its continuous survival.

Tomorrow I will be joining family and friends at our old house in the country, away from all distractions; away from garish city lights and garish city people. Yes, there is a television, but on Christmas Day it only ever goes on for the Queen’s Speech. Otherwise our tradition is to ignore the dreadful idol, whose votaries sit around in dumb amazement, gaping at its even dumber antics. We have fun, a simple celebration of family, of close friends, of conversation, games and frolics aplenty; cocktails, good food, and always punch or mulled wine - or even a bowl of steaming bishop! - to see in Christmas Day. The Lord of Misrule still presides over our Feast of Fools!

On Saint Stephen’s Day mother, father and I will all be out on the local hunt, the first time in three years we have ridden together on this annual occasion. Last year the meet clashed with my skiing holiday; the year before that with a trip to Morocco with my former boyfriend. This year I will be there, in fulfilment of a promise, and I never break promises!

The day after I leave with a party of friends on another skiing trip, this time to Saint Anton in Austria, something I mentioned in a previous post (I love to ski). I’ve been so looking forward to this, something I started to plan almost as soon as I came back from Central America in the summer, which has a counter-aging effect: it slows time right down! Christmas in England; New Year in Austria, it could not be better.

I wish for you the Christmas I wish for myself: one of simple contentment, however it takes you. May the New Year bring us all the things we deserve. All hail Odin; all hail old Saturn; all hail good company; all hail the Boar’s Head!

The boar's head in hand bring I
Bedeck'd with bays and rosemary.
I pray you, my masters, be merry
Quot estis in convivio.
Caput apri defero
Reddens laudes Domino.

The boar's head, as I understand
Is the rarest dish in all this land
Which thus bedeck'd with a gay garland
Let us servire cantico.

Our steward hath provided this
In honour of the King of Bliss;
Which, on this day to be served is
In Reginensi atrio.