Poetry in the sky 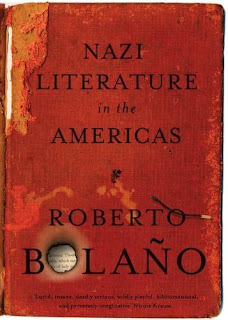 In Nazi Literature in the Americas Roberto Bolaño - a Chilean writer who sadly died aged fifty in 2003 - has provided the perfect literary companion. It’s an exhaustive collection of pocket obituaries of all the major and many of the minor poets, writers and novelists whose political conservatism took them to the extreme right, who became Nazis or fellow travellers, all of whom were born in the Americas. It’s such a pity we do not have a European equivalent.

I confess I had never heard of many of the poets, novelists and artists in his exhaustive anthology. No, I’ll go further: I had never heard of any of them. But perhaps that’s just the nature of the subject, that and the fact that most of them were miserable failures who came to rather bleak and lonely ends.

For those of you who are in as much ignorance as I am over this subject the author has helpfully provided a good summary at the end. There is also a decent bibliography, with the main works of the poets, writers and novelists listed, together with their place and date of publication.

I apologise; I’m being deeply disingenuous, as those of you who have already read this book will know. For, you see, it’s not an encyclopedia at all: it’s a novel, though one of the strangest that you are ever likely to encounter. It’s a deadpan anthology, darkly humorous at points, bitingly ironic, of people who never existed, poems never written and novels never published. I would go further: it’s a literary zoo, a collection of people who could never exist.

Bolaño, whom I am only just discovering, is from the same place and the same tradition as Jorge Luis Borges. We are in the same territory, in other words, as The Universal History of Infamy and Borges’ other brilliant fictions, which exist in a half-world between truth and inventiveness. Nazi Literature in the Americas, first published in Spanish in 1996, owes a considerable debt to Borges. Bolaño has the same imaginative and creative facility, if not the same economy of genius.

His book is the world of the impish imagination; his creations for the most part grotesque and, for me, outrageously funny. There is the Brazilian Luiz Fontaine Da Souza, who writes obsessive, and eye-wateringly lengthy, multi-volume refutations of the carriers of the modern idea, from Montesquieu to Sartre ( the latter’s Being and Nothingness is a particular obsession!). There is Zach Sodenstern, the American who wrote the Gunther O’Connell series of science fiction novels, whose hero has a German Sheppard dog with telepathic powers and Nazi tendencies! And then there is my personal favourite, Carlos Ramirez Hoffman, a Chilean poet in the pay of Pinochet’s death squads, who composes poetry in the sky in a plane fitted with smoke canisters, to “write out his nightmares, which were our nightmares too, for the wind to obliterate.” I have a feeling that both the Futurists and Dadaists would have adored him!

And so it goes on. Bolaño does not just invent people and ideas, he invents complete schools of literature, including French ‘barbaric’ writing, lead by a retired Parisian concierge much given to urinating on the novels of Stendhal! The whole thing is a great pastiche. In the sense the subject matter is almost irrelevant, in that the real explorations here are into words and ideas, to the imaginative and creative use of language in a brilliantly playful fashion. It’s the work of a literary trickster, the Loki of the imagination. The real love, the inner love, is that of books and all they have to offer.

There is, of course, another possibility, another piece of Borges-style magic. Bolaño has created an alternate literary universe, one peopled by obsessives, cranks and literary mediocrities. Goebbels once lamented that National Socialism seemed incapable of creating great art. What he did not understand, what he could not understand, was that such a thing was impossible, because great works of art can only be created by minds that are free to roam without restriction. In the Goebbels universe the only art that could exist is that of the oddities who populate the pages of Nazi Literature in the Americas.
Posted by Anastasia F-B at 16:32