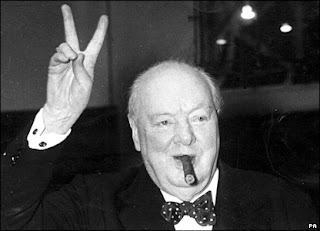 I love words, I love the English language, a point I’ve made previously. I delight in good prose and good verse, in the rise and fall of sounds, in brilliant, perceptive images. There are few people who can really command language now, and none at all in public life. Politicians are particularly guilty here, reaching for stale phrases and pre-fabricated expressions, fatuous garbage like ‘British jobs for British workers.’

It was not always thus. There are politicians in modern history whose command of language was sublime, people who could have lived in the great ages of the past, in the Athens of Pericles, people whose words will always be remembered for their perspicacity and transcendence. For me there are two in particular: Abraham Lincoln and Winston Churchill.

Take Lincoln’s Gettysburg Address, so few words which conveyed so much, so much understanding, compassion and generosity;

Four score and seven years ago our fathers brought forth on this continent, a new nation, conceived in Liberty, and dedicated to the proposition that all men are created equal.

Now we are engaged in a great civil war, testing whether that nation, or any nation so conceived and so dedicated, can long endure. We are met on a great battle-field of that war. We have come to dedicate a portion of that field, as a final resting place for those who here gave their lives that that nation might live. It is altogether fitting and proper that we should do this.

But, in a larger sense, we can not dedicate -- we can not consecrate -- we can not hallow -- this ground. The brave men, living and dead, who struggled here, have consecrated it, far above our poor power to add or detract. The world will little note, nor long remember what we say here, but it can never forget what they did here. It is for us the living, rather, to be dedicated here to the unfinished work which they who fought here have thus far so nobly advanced. It is rather for us to be here dedicated to the great task remaining before us -- that from these honored dead we take increased devotion to that cause for which they gave the last full measure of devotion -- that we here highly resolve that these dead shall not have died in vain -- that this nation, under God, shall have a new birth of freedom -- and that government of the people, by the people, for the people, shall not perish from the earth.

People think of Churchill principally as a politician. But he was so much more. He was a writer of brilliance, an historian who wrote in simple and beautiful terms. I don’t suppose he ever read the essays of George Orwell, particularly those on the degeneration of language in modern political discourse. But he committed none of the sins that Orwell warns of. His speeches were poetic in intensity, with a simple message full of vivid and memorable phrases and images. People have their favourites, and here the Fight them on the Beaches and Never in the Field of Human conflict orations come to mind. They are good but my particular favourite is the one he delivered at the most desperate moment in British history, just after the capitulation of France, the one in which the expression the Battle of Britain was coined for the first time;

What General Weygand called the Battle of France is over. I expect that the Battle of Britain is about to begin. Upon this battle depends the survival of Christian civilization. Upon it depends our own British life, and the long continuity of our institutions and our Empire. The whole fury and might of the enemy must very soon be turned on us. Hitler knows that he will have to break us in this Island or lose the war. If we can stand up to him, all Europe may be free and the life of the world may move forward into broad, sunlit uplands. But if we fail, then the whole world, including the United States, including all that we have known and cared for, will sink into the abyss of a new Dark Age made more sinister, and perhaps more protracted, by the lights of perverted science. Let us therefore brace ourselves to our duties, and so bear ourselves that, if the British Empire and its Commonwealth last for a thousand years, men will still say, ‘This was their finest hour’.

The Empire did not last a thousand years; it hardly survived the conclusion of the war. No matter; these words are immortal. I have no doubt at all that if England lasts for a thousand years people will still say he was our greatest orator.