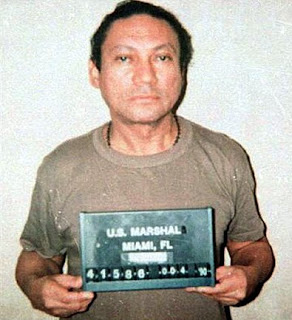 It’s my usual practice to carry out as much background research as I can before visiting a place. I did so for the various countries of Central America, an altogether fascinating exercise. I now know a reasonable amount about the politics and history of Panama and Costa Rica, to add to what I already knew about those of Guatemala and Honduras.

There is one story I would like to highlight here, one case I would like to highlight, that leaves me with a considerable amount of unease over the example set in the exercise of international power politics; perhaps bullying and arrogance would be better words to use. It concerns Manuel Noriega, the one-time military dictator of Panama, a man who has spent the past twenty years in jail, first in the United States and now in France.

I should say at the outset that, if you do not know anything of his life, Noriega was not a very pleasant human being. Not only was his rule in Panama brutal but he was also involved in various criminal activities, including drug smuggling, racketeering and money laundering. It was on the basis of this that he was subsequently charged and convicted. I have no doubt at all that the accusations were fair.

What was neither fair nor just was the way in which his conviction came about. There are so many questions here, unanswered questions, about America’s role in the world, about the activities of the Central Intelligence Agency, about the nature of new forms of bullying imperialism.

By what right did the United States, I have to ask, invade Panama, killing an unknown number of people in the process, and then carrying off a head of state to try him under an alien jurisdiction? Where is the legality here? It seems to be an exercise in nothing more than pure power, in duplicity and in treachery, one that set a dangerous precedent for future actions. It was done because it could be done, not because it was right.

Let me sketch some background details, just to put matters in context. It should be borne in mind that Noriega was not only a leading figure in Panamanian political and military circles he was also an important source of support for US intelligence operations in the Americas. During the Regan administration he had helped channel money and arms to the Contras, the guerrillas fighting the Marxist dictatorship in Nicaragua. He was useful enough for the CIA to overlook the covert relationship he was also building up with Colombian drug cartels.

However, once these contacts became public in the late 1980s Noriega became more of an embarrassment than an asset. In 1987 the American government began a campaign to drive him from power, though why he should have been subject to such singular action remains a mystery when there were other dictators, just as venal, just as corrupt.

In December 1989 then President George Bush, a former director of the CIA, launched Operation Just Cause, in which close of thirty-thousand US troops invaded Panama, a sovereign country, a member of the United Nations. It was the biggest, most murderous ‘arrest warrant’ in history, all to bring a foreign politician and soldier before the American courts. A formidable battery of weaponry was brought to bear, including helicopter gunships and stealth bombers, against a country that had no air defences. In Panama City, El Chorillo, one of the poorest districts in the capital, was heavily bombarded. In the subsequent fires some fifteen thousand people were left homeless.

We will never know exactly how many people died in this first ‘Bush War’ though estimates go as high as ten thousand, nothing compared, I suppose, with the war of Bush fils in Iraq. But still, so many dead in what was little more than a personal vendetta is sickeningly disproportionate.

Bush’s actions had no legality whatsoever, merely part of a bullying relationship the United States had with Panama going right back to the beginning of the twentieth century, when the country was created out of Colombia, specifically so that the Americans could take control of the Canal. His action was condemned by both the United Nations and the Organisation of American States, which demanded an immediate withdrawal.

Among the reasons Bush gave for the invasion was that he was “defending democracy” in Panama and “combating drug trafficking”. The odd thing is that these had never been issues in the past. When he was director of the CIA Bush had in fact increased payments to Noriega, knowing full well of his involvement in drug trafficking. Indeed after the invasion the flow of cocaine through Panama got steadily worse.

Let’s be clear about one thing: Noriega was no loss to Panama and most people were glad to see the back of him. But much anger remained over the heavy-handed use of force, about the national humiliation involved, nothing new, as I have said, in American-Panamanian relations.

The simple fact is that Noriega was client who was no longer useful. A small precedent had been set with future dreadful consequences. I simply cannot escape the conclusion that Panama’s former strongman has been subject to an appalling injustice. There was no international tribunal here, no suggestion of war crimes. In his American trial he wasn’t even allowed to raise his CIA contacts in case it “confused” the jury. If it was necessary to try him for previously condoned crimes it should have been under the law of Panama, not the United States or France.
Posted by Anastasia F-B at 17:01