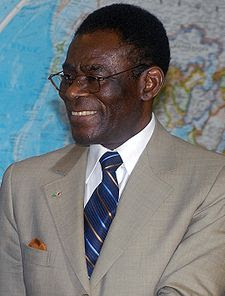 This year the prize for excellence in African leadership goes to (cue background of rolling drums), goes to…actually, it goes to nobody. So sorry for the anti-climax when I’m sure you all expected one of the Continent’s great stars to emerge, like Omar al-Bashir, Robert Mugabe or maybe even Teodoro Oblang Nguema Mbanasgo. Perhaps some of you, perhaps all of you, have never heard of the latter. If not, he is the president of Equatorial Guinea, and if anything even more corrupt, brutal and thuggish than al-Bashir and Mugabe.

Anyway, let me return to the prize question. I’m not joking: there truly is a prize for excellence in African leadership, worth some £3.5 million ($5million). But the pot just grows and grows, because the Mo Ibrahim Foundation announced that for the second year running it was unable to find a candidate worthy of this singular honour.

More generally it’s not been a good year for African prizes. The Observer reported last weekend that the UN has failed to present its award for “improving the quality of human life” because human rights groups have objected to it being funded by a rather repellent dictator. Can you guess who? No? Well it’s funded by Teodoro Oblang Nguema Mbanasgo.

The prize money itself is clearly part of the loot acquired from the wholesale plunder of Equatorial Guinea’s oil wealth. Probably this would have gone unnoticed in a Continent where extortion seems to be a normal part of the economic process. Unfortunately for Teodoro Oblang Nguema Mbanasgo the kudos that he may have gained by his generosity has been spoiled by the arbitrary arrest and torture of political opponents, people whose “quality of human life” is somewhat on the low side.

So, a continent of 53 nations and one billion people does not seem to be able to produce a single political worthy, clearly a cause of some embarrassment. In Kenya The Daily Nation was even moved to observe that “The idea was always noble, but its implementation was not clearly thought out.” It most certainly was not.

The record of Africa post-empire has been fairly dismal to say the least, with so many people in so many nations merely there to be ruthlessly exploited by narrow and venal ruling political elites, people who import fleets of luxury cars in places that barely have serviceable roads. Now if there had been a prize for human rights abuses, for genocide, for brutality, for running economies into the ground, the worthy candidates, I feel sure, would fill several fleets of mercs. Oh, sorry, I’m not being fair. It’s the entire fault the wicked colonialists, of empires that disappeared over fifty years ago. In Africa some things never change.
Posted by Anastasia F-B at 16:44