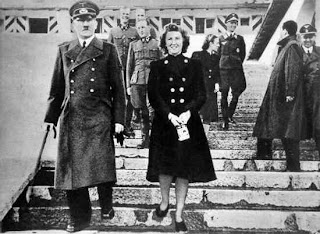 A new biography of Eva Braun is scheduled for publication later this month. Entitled Eva Braun: Life with Hitler by Heike Gortemaker, a Berlin-based historian, it claims to be the first truly objective and academic study of the life of Hitler’s girlfriend. It certainly reports some novel findings: Eva was not just there in the background but had an important influence on Hitler; that she was politically-committed and was allowed to attend important meetings, and, perhaps most interesting of all, she and Adolf actually had a sex life!

I do have to reserve judgement here and wait until I’ve had a proper look at this book, the result of three years of research, research which has uncovered previously unseen documents, letters and diaries. I’ve read Angela Lambert’s The Lost Life of Eva Braun, published three years ago, a plodding unfocused tome, based all too often on surmise and speculation. I came away feeling that, yes, Eva was dull not bad; that goodness is sometimes just as banal as evil. So, a politically and sexually active Eva will come as a refreshing alternative, as will a work based on solid scholarly investigation.

Having said that I can only hope that the ‘evidence’ is better than the advanced reports I’ve read in the press. Perhaps the publishers are being canny, only releasing tit-bits, nuggets of information to whet the appetite. Apparently Eva knew about the Holocaust and ‘made to attempt to speak out.’ Would it have made any difference if she had? Goebbels noted in his diary that “She was a bright girl who meant a great deal to the Fuhrer”. Yes, but so what, what exactly does that tell us, in what way does it take our understanding any further forward?

Gortemaker blames British historians for shaping the traditional ‘dumb blonde’ image of Eva, blaming the late Hugh Trevor-Roper, a war-time intelligence officer, who compiled a brilliant and lastingly influential report on Hitler’s last days in the Berlin bunker. She says that;

Trevor-Roper took his cue from Albert Speer, whom he interviewed at length. Speer said, “For all the writers of history, Eva Braun is going to be a disappointment”, and claimed that women had no significant role to play in the Nazi party. It was said of all the women, from the wives to the secretaries. Speer was trying to protect his wife. There was a strong movement to protect women in general, and so it became generally accepted that women had little role to play in the politics of the Third Reich.

Two things arise here, an empirical observation and a question. It’s perfectly true that women did have little role to play in the politics of the Third Reich, and there were few in any leading positions in either the party or the state. The question is simple: why would Speer feel the need to ‘protect the reputation’ of a dead woman?

Never mind that; what about the sex? Yes, what about it? Gortemaker is “totally convinced” that Eva and Adolf had a normal sex life. Well, all I can say is that for me, or for anyone working in the field of history, “totally convinced” simply does not cut it; only proof does. What proof does she offer here? Apparently Eva’s friends and relatives say that when she saw Neville Chamberlain sitting on a sofa in Hitler’s Munich flat in 1938 she giggled, saying “If only he knew what goings-on that sofa had seen.” Hmm, well, yes, more than a little cryptic, I would have thought; it could have been Blondie and the cat! Still, I shall wait and see. :-)
Posted by Anastasia F-B at 15:18