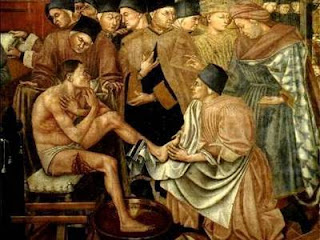 A new and terrible disease appeared in Europe towards the close of the fifteenth century. It was 'distanced', much like AIDS-the 'Gay Plague'-when it first appeared in the 1980s.

Dr Ruy Diaz de Isla, the Spaniard who was among the first to treat it, called it 'the Serpent of Hispaniola', being the first to recognise that it had originated in the New World, brought back to Europe by the crew of the Nina. It first became endemic in 1494, during the invasion of Italy by Charles VIII of France. From there his mercenary army carried it to all parts of Europe. In 1495 the Maximilian I, the Holy Roman Emperor, issued a decree against 'the Evil Pox', taken to be God's punishment for blasphemy. Voltaire was later to write of Charles' Italian adventure, "France did not lose all she had won. She kept the pox." It was Girolamo Fracastoro, an Italian poet, who gave the ailment its abiding name, when he composed some verses about a shepherd struck down by the French disease. The shepherd's name was Syphilis!

I should add, for lovers of trivia, that treatment in the early days called for amputation of the perceived source of the problem. I won't dwell on this for fear of upseting the males among you. Suffice to say it would have been possible to build a mountain with them in the sixteenth century. :-))
Posted by Anastasia F-B at 18:57